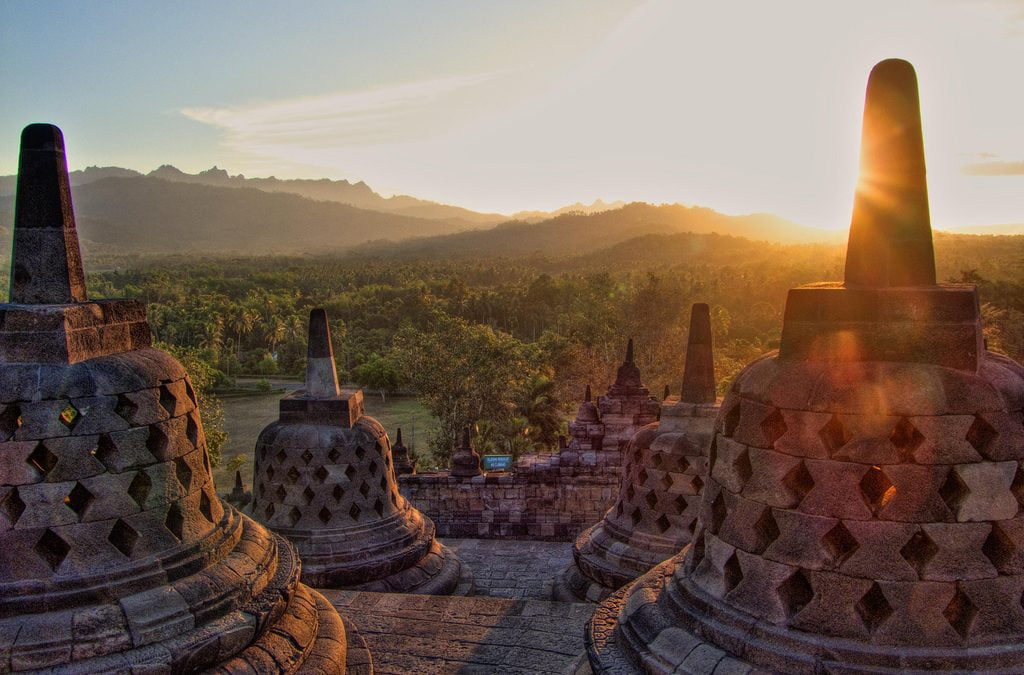 At about 40 km northwest of Yogyakarta  you’ll find the most popular tourist attraction in Indonesia. The Borobudur (literally: “the temple of Buddha on the mountain” ) is regarded as the largest Buddhist sanctuary in the world. It was founded around the year 800. In the period until the 10th century the Borobudur temple was the spiritual center of Buddhism in Java. Then when the power center shifted from Central Java to the east the  Borobudur was in decline. Until the 19th century the complex was hidden under vegetation and ash from the surrounding vulcanoes. After the rediscovery in 1814 and subsequent excavation several restorations were made. In particular,  the rigorous restoration which took place in the period 1973-1984 with the support of UNESCO has ensured that the Borobudur has recovered its old grandeur.

The temple complex is built on a hill in the shape of a large stupa. A stupa is a Buddhist structure that contains the relics of a buddhist saint. The square base measures 123 by 123 meters. The height of the monument is 31.5 meters. The building has nine floors, of which the lower six are square and the upper three round, while a central stupa is forming the top of the structure. On the top three floors are 72 small stupas in which Buddha statues are placed. On the square base are 1500 beautiful reliefs to see about the life of Buddha and historical events and stories. It is not just the temple which is beautiful,  from the top floor the view is magnificent.

A few kilometers east of the Borobudur are the buddhist Mendut Temple and Pawon Temple. Inside the Mendut Temple there are three large sculptures, including a three meter high Buddha statue. On the outer walls of this temple are beautiful reliefs.