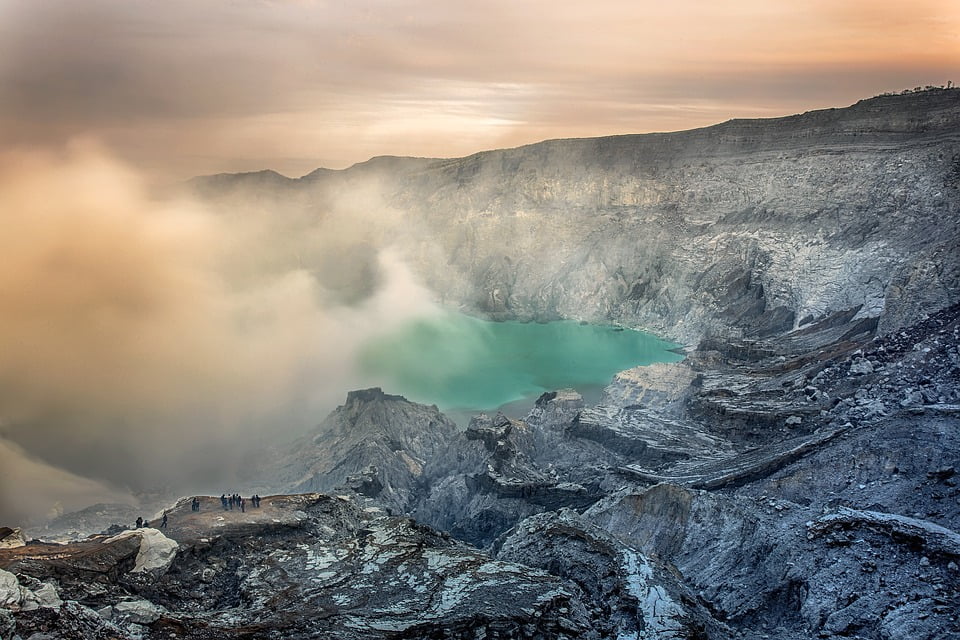 Ijen volcano (Kawah Ijen), located in the far east of Java on the Ijen Plateau, has with a beautiful turquoise colored crater lake a gem of unparalleled beauty to offer. Once the Ijen Plateau was one large crater with an area of ​​no less than 134 square kilometers. Nowadays within the area of ​​this ancient crater there are several volcano craters located. The Ijen (2380 meters) and the Merapi (2800 m, which is an other volcano than the eponymous one near Yogyakarta is) on the northeastern edge of the plateau and the Raung (3332 meters) in the southwest dominate the landscape in this area.

However, the crown jewel of the plateau is the beautiful crater lake of Ijen volcano. This sulfur lake  is accessible after a tough walk of half hour through a beautiful volcanic landscape. The three kilometer path, although steep at certain stages, is good passable. Along the way you regularly encounter sulfur carriers, who descent the mountain with baskets on their shoulders filled with 60 to 90 pounds of sulfur lumps. The occasional heavy efforts you must make to reach the crater rim at 2380 meters, however will richly rewarded with a breathtaking view of the turquoise colored crater lake with its rising smoke plumes which is 200 meters below. It measures 700 by 600 meters and has a maximum depth of over 200 meters and is one of the largest crater lakes on earth. With an acidity of pH 0.18 this is the harshest crater lake in the World. It is possible to go down through a narrow and steep path to see how the sulfur recovery occurs and the baskets of the solidified sulfur yellow-colored lumps are filled. And whereafter the the sulfur carriers begin their heavy tour back starting first 300 meters up the crater wall and then the three kilometers down in order to weigh the sulfur there.