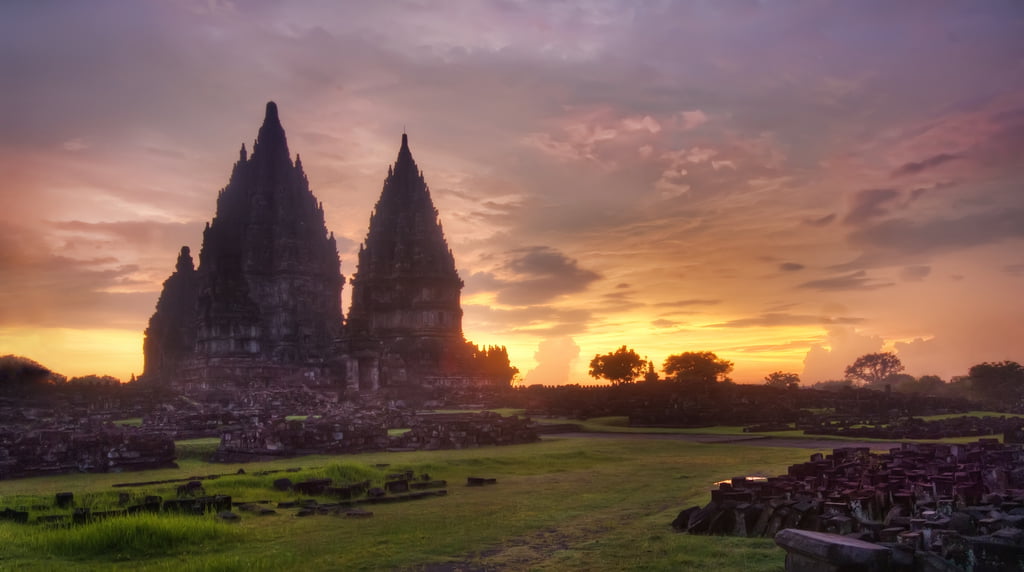 hough less known than the Borobudur but certainly a sight not to be missed is the Prambanan temple complex located less than 20 km east of Yogyakarta. Prambanan (real name: Lara Jonggrang ) is the largest Hindu temple complex in Indonesia. The temples were built around 850. But like the Borobudur after a short time these temples also were in decline . In the early 19th century, the temple was rediscovered. Several restorations followed, but the recovery was slow. Only in 1953 the reconstruction of the main temple was completed. Since then the reconstruction is progressing steadily and till the day further work is continuing on the restoration of the temple complex.

The complex consists of several temples on an elevated courtyard. This courtyard is, in turn, again surrounded by a slightly lower plateau in which the remains are of 224 smaller temples  that each should have been about 14 meters high. The three main temples are dedicated to the three main Hindu gods Shiva, Vishnu and Brahma. The Shiva temple stands in the middle and is 47 meters high and 34 meters wide. To the south is the temple dedicated to Brahma and north the one dedicated to Vishnu. The main temples – especially the Shiva Temple – feature beautiful relief sculptures that include imagining the Ramayana epic. Opposite are three smaller temples dedicated to Shiva’s bull Nandi, Brahma’s mount goose Angsa and Vishnu’s eagle Garuda .

An unforgettable experience is to attend an evening performance of the Ramayana Ballet (accompanied by gamelan music) in the open-air theater at Prambanan. A beautiful colorful spectacle in a magnificent setting with lit Prambanantemples in the background .

Not far from the Prambanan located on the south side situated on a hill are the ruins of the Ratu Boko Palace. In itself, the complex is not really special, but it is a place with a beautiful view on the Prambanan and where the sunset produces a fine spectacle. North of Prambanan are also some interesting temples. One is the Sewu Temple, with its temple guards. The temple was badly damaged during the 2006 earthquake.